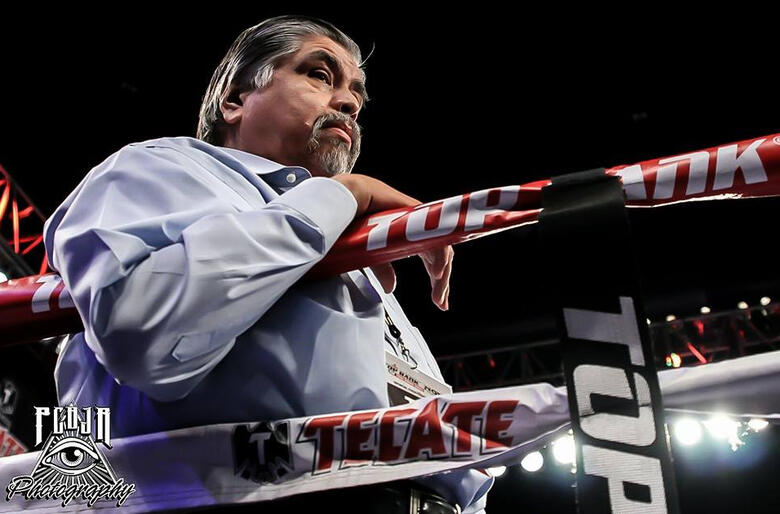 On October 11th, our father Ricardo Jimenez passed away after suffering a stroke. He was sixty-four years old and is survived by his daughters, his sisters, his brother, and several nieces and nephews, among other extended family and friends.

When news got out that our father had passed away, the immediate outpouring of support from the sports world he was part of was overwhelming. We cannot express how comforted we were by all the messages and stories that people shared and the impact he left on so many people.

Our dad is probably one of the most well-known publicists in the boxing world today, but before that he was a newspaperman through and through. He began his editorial career in 1985 at La Opinion, the largest Spanish daily in the United States and 15
years later would leave that newspaper as only the third sports editor in the 75-year history of the most prestigious Spanish-language paper in the United States.

Soon after graduating from Cal State Fullerton, he started at La Opinion covering the professional basketball and football beats, rising very quickly to become one of the most well-known Hispanic football experts in the country as he participated in local and national radio broadcasts throughout the United States. Later he traveled the nation covering both the Raiders and Lakers for over 15 years and expanding his knowledge of other sports, such as tennis, baseball, boxing and soccer. His work on those telecasts garnered him three local Emmy's and his writing won him a "Sportscaster of the Year" honor from the World Boxing Organization. He also penned a very popular column "Anotando" where he took on all controversial aspects of professional sports.

His reporting, editing skills and dependability earned him the Sports Editor Job at La Opinion in 1997, becoming only the third person to be named to that position in the long history of the well-known paper.

In 2000, he was recruited by Bob Arum, President and Founder of Top Rank Inc, the largest boxing promotional company in the world, to help promote the top Hispanic boxers in that boxing company as well as promoting two boxing series for Univision and DirecTV Latin America. During his fifteen years at Top Rank, Jimenez took Erik Morales, Jose Luis Castillo, Antonio Margarito, Miguel Cotto, and many others to the next level as they became household names in the Latino markets in the United States, Puerto Rico and Mexico.

His work led him to be call the best "PR Man" in the sports business by Telefutura and Univision Sports Anchor Ricardo Celis in a
Hispanic Wire Monitor Monthly Newsletter. In 2007 he was awarded the Marvin Kohn Good Guy Award by the Boxing Writers Association of America, and he was inducted into the WBC International Hall of Fame in Los Angeles, California in 2015.

Aside from these accomplishments and others throughout his career, we knew him first and best as our dad: funny, smart, and the most loving father that anyone could ask for. We watched movies with him every weekend and bonded over our love for the same TV shows and music. He loved listening to The Beatles and singing their songs to us. He loved watching sports, on television or in person. We went to so many stadiums with him, and we loved hearing stories about his work and his childhood.

He was there for us without fail no matter what. He loved us and he made sure that we knew it.

In his memory, we are setting up this fundraiser so that we can pay for funeral expenses and give him the celebration that he deserves. As his daughters we are his next of kin, and we are currently college students. Any amount and social media share is sincerely appreciated.